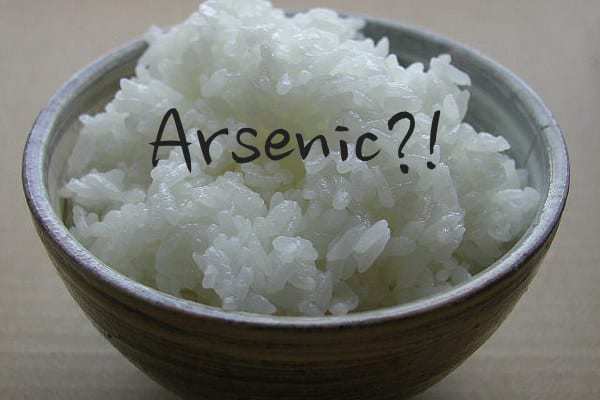 Well, the title might be a bit offending, but it is not intended to pique the unconditional and immense care you provide to your child. It is what the latest research has to say regarding feeding rice to children and the rising amount of arsenic in blood. According to the health news that was published over the internet on 26th of April, 2016, parents mostly provide rice as the first food to their baby. However, little do they realize that it can cause an increase in the arsenic levels in blood of their child.

What is Arsenic? And how does it enter our food?

Arsenic is a chemical that is present mostly in the form of minerals. Arsenic is also present in certain foods, most common among which is ‘rice’. It is one of the most toxic elements that upon entering the body, can produce a sequelae of hazardous events. So how does it actually get incorporated into rice? Well, this mineral is basically a tract element, and enters the food owing to increase in pollution all around the globe. Moreover, arsenic is present in two forms: organic (found in animal and plant tissues) and inorganic (present in soil, rock or water). The latter form of this mineral produces toxicity. The most common form of arsenic poisoning according to Wikipedia is ‘ground water’, however, rice is known to accumulate more of this mineral than any other food. Other sources of arsenic include seafood.

Researchers suggest that those babies are likely to have higher concentrations of this mineral in their urine, who have been fed with rice during the early years of their lives. The study also reports that highest amounts of this trace element was found in subjects who consumed baby rice cereal.

According to the lead researcher of the study, Margaret Karagas, who is also the Chair of Epidemiology at Darthmouth University’s Geisel School of Medicine in Hanover, N.H, the amount of this trace mineral in the urine of the babies rose in accordance with the number of servings of rice-based or rice containing meals.

Kangras and various other health professionals said that the impact of the rising levels of arsenic in blood on the health of the children are yet not clear.

The director of the neonatal neuro-developmental follow-up program at Cohen Children’s Medical Center in New Hyde Park, N.Y., remarked that the results are definitely of great concerns, yet it requires more research. She also pointed out towards the possibility of contribution of other foods in the rising levels of arsenic in blood of these infant subjects.

In a research that was performed by the Food and Drug Administration (FDA), we find that about half of the baby rice-meals in the U.S retail stores, that got tested in the year 2014, failed to fulfil the organization’s criteria of 100 parts per billion of inorganic arsenic.

As Karagas remarked about the FDA that, “This is an important step, that they’ve taken the initiative to propose a limit that applies to infant rice cereals”

WARNING: FDA claims arsenic to be a carcinogen! Evidence is present that it can affect a child’s immune and intellectual development.

Milanaik has commented that arsenic is also known to be present in certain infant plant-based meals which includes even apple sauce and apple juices, and this happens owing to the use of pesticides. She remarked that,“Even though in this country we’ve outlawed it, we used it for so long that it’s leached into our soil and really becomes part of our vegetation.”

Karagas and her team performed a study over 759 urine samples that were obtained from infants, who were born to mothers that were enrolled in the New Hampshire Birth Cohort Study between 2011 and 2014. The growth and progress of these infant subjects was tracked on phone after a period of every four months until they reached the age of 1. At that time, a last interview was conducted regarding the past week’s dietary patterns, so as to investigate whether the subject had consumed any rice cereal or not. This criteria also included foods that were sweetened with brown rice syrups.

The analysis revealed that four out of five babies were fed with rice cereal during the first year of their lives. More than 3 out of 5 subjects started consuming rice-based foods during their early life period, that is, when they were 4-6 months old. 43 percent of the subjects consumed some rice-based mean within the past week, and about a quarter of them consumed food that contained sweetened rice syrup.

Among the urine samples of the infant subjects, about 55 percent of them had taken some kind of rice-based cereal within the last two days.

The American Academy of Pediatrics advises the parents to include some amount of diversity in the meal of their kids, like grains.

According to the recommendations provided by FDA, rice must be cooked in excess water which must be drained, so that 40 to 60 percent of inorganic can be removed from your meal.