15 Signs Your Headache Could Be Something Way Worse 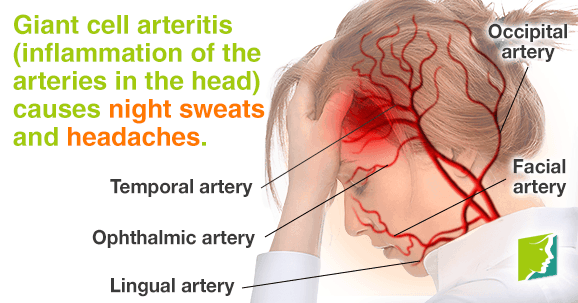 2. Pain Concentrated In Your Temple and Impaired Vision

If you are stuck with a painful and disruptive headache for the first time, it could be a symptom of Giant cell arteritis (GCA). GCA is when the lining of the arteries in your head become inflamed, often resulting in immense head pain and visual disturbances.

With giant cell arteritis, the inflammation of the arteries causes them to swell, narrowing the blood vessels. This reduces the amount of blood carrying oxygen and nutrients to your body’s tissues. The swelling usually occurs in the arteries running through the temples. This is why Giant cell arteritis is sometimes called temporal arteritis. GCA is rarely reported in those younger than 50, while it is also twice as likely to affect women.

A headache associated with GCA is usually described as throbbing and persistent. It will often occur at the back of the head, behind the eyes, or in the upper neck. These regions may be tender to touch and can have a burning sensation. Other common symptoms of GCA, include a tender scalp and jaw pain. It is also common to confuse the onset of the condition with the flu. It is important to look out for these symptoms when you have a sudden headache, as they could be indicative of GCA. Prompt treatment is crucial, as untreated GCA can lead to blindness or stroke.

Once diagnosed, you are likely to be prescribed corticosteroid medications. Within a few days of starting treatment, you will feel much better, with the relief of symptoms. But even with treatment, it is common to have a relapse. For this reason, regular checkups and treatment of any adverse effects from the medication are important.