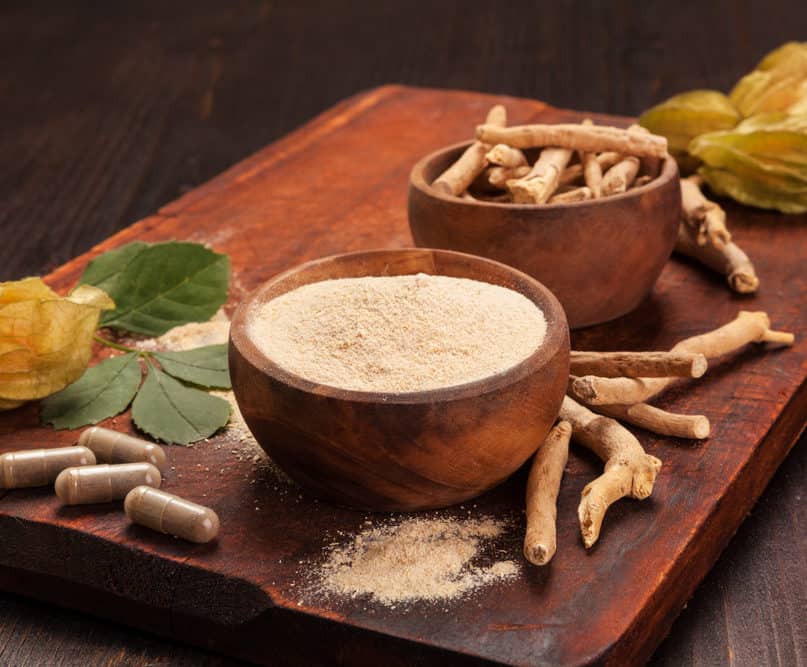 Ashwagandha, also known as “Indian Ginger” has a wide range of benefits. It is one of the most important herbs in Ayurveda, a form of alternative medicine based on Indian principles of natural healing. Used for over 3,000 years to relieve stress and increase energy levels. As well as improve concentration.  So what makes this ancient plant so great? Ashwagandha falls into a category of plants called adaptogens.  Adaptogens are herbs or other plants that help bring our adrenals and nervous system back into balance. They help our bodies better cope with both internal and external stressors. It is also a powerhouse of antioxidants that fight the free radicals that cause aging. Which makes us look and feel younger.

Mineral-dense ashwagandha enhances communication within the complex endocrine system reducing cortisol and increasing the production of blood. The increased blood flow and regulated hormones have a positive effect on libido and menstrual health and can also help with fertility. It can also be applied to the skin for treating wounds, backache, and one-sided paralysis. The list goes on and on. Ashwagandha also contains chemicals that might help calm the brain, reduce swelling (inflammation), lower blood pressure, and alter the immune system. Many of its health benefits are attributed to its high concentration of withanolides, which have been shown to fight inflammation and tumor growth.

Withania somnifera, known commonly as ashwagandha, Indian ginseng, poison gooseberry, or winter cherry, is of the nightshade family. Not to be confused with Physalis alkekengi, both are known as winter cherry.  The ashwagandha plant is a small shrub with yellow flowers that’s native to India and North Africa. Extracts or powder from the plant’s root or leaves are used to treat a variety of conditions.  The plant, particularly its root powder, has been used for centuries in traditional Indian medicine. The plant species’ name somnifera means “sleep-inducing” in Latin.  Ashwagandha is one of the most widespread tranquilizers used in India. The root’s horsey smell is said to confer the strength and virility of a horse. Various parts of the plant are used, but the most common in supplements is an extract of its roots.

Fruits from the Aswagandha plant can be eaten fresh, and the root is usually dried to make tea, or dried and ground for use in supplements. Though there is a myth that it is poisonous, it is possible to eat the fruits of the ashwagandha plant.  They are somewhat similar to golden berries and cherry tomatoes in appearance, but they are fairly bitter and not to everyone’s taste and they should be handled with care. Since large quantities of the fresh plant and be toxic.  It acts mainly on the reproductive and nervous systems, having a rejuvenating effect on the body, and is used to improve vitality and aid recovery after chronic illness. The whole plant, but especially the leaves and the root bark, are abortifacient, adaptogen, antibiotic, aphrodisiac, deobstruent, diuretic, narcotic, strong sedative and tonic. The seeds are used to curdle plant milks in order to make vegetarian cheeses.